What Price Win For The Man Who Gets What He Wants? 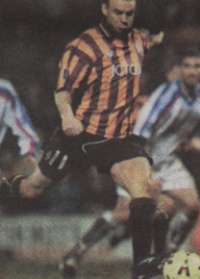 City winger Peter Beagrie (right) snatched a last minute penalty to give the Bantams a hard fought win over the physical London side and Bradford Chairman Geoffrey Richmond can afford himself a wry smile as his team moves four points clear in second place in the first division.

The game started slowly with Palace looking to score on the break and the excellent David Tittle marshalling Bradford’s 19 goal man Lee Mills but as the game drew towards half time City fans memories had started to drift back the disappointing afternoon against QPR some two months ago with Palace soaking up pressure just as their London rival had done. As with the QPR game, Palace took the lead in the second half with Tuttle squeezing a shot in as Jacobs attempted to clear. The final outcome renders the question of whether the ball crossed irrelevant.

Jewell removed Steven Wright and pushed Blake out wide right with Isaiah Rankin in the forward line. While Lawrence looked shaky as a full back, Blake’s wing play teased Palace’s left back Sun Jihai, already on a yellow card, and City began to force many corners. One of these corners, delivered by Gareth Whalley, went across the goal and, after a time, was struck into the net by Ashley Westwood, scoring his first goal for the club.

City banged on Palace’s door and a second goal had a certain inevitability. Issy Rankin took a tumble in the box after he was felled by Palace keeper Kevin Miller following a barrage of shots on the Londoner’s goal. Palace complained, naturally, but the award seemed clear enough with Rankin having danced his way to glory only to have his legs taken away by the keeper. Ice cool Peter Beagrie right footed the ball into the net.

Sun Jihai was sent off later as Palace lost control and Clinton Morrison, frequently caught off side by the effective City back line, should have seen red for an insanely high foot towards Gary Walsh as the game drew to a close.

All of which added to Palace’s woes. Manager Steve Coppell said after the game that he expected to be in control of the club until the end of the season, reminiscent of last season’s antics in which absent winger Atillio Lombardo was put in charge of the club despite the fact he can not speak English. Chairman Mark Goldberg, who came into the club with a promise of cash and promotion now finds himself having to sell players and facing up to another season in division one. Richmond, labelled by the Sunday Mirror as "The Man Who Gets What He Wants", must smile. He has given City the funds, although less than is commonly thought, but the girt and determination to come back from a goal behind on a muddy pitch on a cold Tuesday night in January can not be bought, much as Goldberg must wish they could.

Could The Palace win be the most important of the season? Your opinions to MichaelWood@Iname.com