The Boy From Brazil & Other Stories

The Many Incarnations Of Graham Taylor 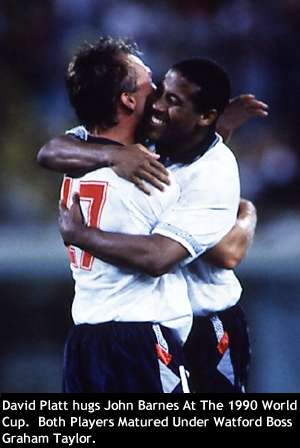 In a week dominated by the England Manager post one of it’s least auspicious incumbents brings his high flying Watford team to Valley Parade on Saturday.

Talyor had guided England through a difficult European Championship Qualifying campaign but came unstuck one October night in Rotterdam when he famously uttered to a linesman, standing by while the Referee allowed Dutchman Ronald Koeman to pull David Platt down, then score a free kick, "Tell your friend he has just lost me my job". One wonders what utterance Hoddle would have whispered.

In a previous incarnation Taylor was a successful manager with Aston Villa. City fans remember with nausea Taylor’s team, fired on by Platt, taking a place in the First Division from the Bantams on a sunny Birmingham afternoon in May some ten years ago.

He blotted his copy book at Villa by spending Ł650,000 on Ian Ormondroyd, Bradford’s gangly forward, an able player but hardly valuable but the same thing was said about a player Hoddle took from Watford to Chelsea during his days at Stamford Bridge for over two million pounds. That player was sold on to Birmingham. I do not think we need mention his name again.

It is in his previous incarnation, the plucky manager dragging an unfashionable club up by it’s boot straps after his forty days in the desert of Wolves, that Taylor comes to Valley Parade and, should he take a look in the home team dug out, he may afford himself a smile of recognition.

Like Taylor, Paul Jewell had a fairly inauspicious playing career and like Taylor he was given control of a club, and considerable finances, at a young age. Both men seem to be able to make diamond players out of roughly formed rocks. Taylor’s success with the likes of Barnes and Sinnott could be easily matched by Blake and Moore. While there is little chance of their respective chairmen being confused for one another, the similarities are significant.

Using Taylor’s example Jewell would do well to learn to stick close to his Chairman and will know that he will always be open to criticism having not played the game at the top level. Taylor was seldom judged with any real gravitas when dealing with the best players in the land and appeared to resent the team’s stars, something Jewell would do well to avoid.

Nevertheless the two "uncultivated" footballers turned managers fight out for a place in the Premiership with the likes of Birmingham’s Superboy, a hair’s breadth distance between the top few sides.

Watford’s Gifton Noel-Williams, their mark two of That Birmingham Striker will be heartened by the suspension to Darren Moore, Andy O’Brien will probably play. The 1-0 win to Watford seemed to Damn City’s season in November but the results of the two teams since have cast that clash in a different light.

With back to back losses being the extend of City’s poor performances this year Jewell will be keen to avoid a third defeat. A win over Watford, who topped Sunderland 2-1 last week, will go some way to repairing the damage done at St Andrews’ last week. A loss and, after back to back wins over the top two in the league may get Graham Taylor’s name mentioned for the vacant job at Lancaster Gate.

Well, maybe not in this lifetime

Turnip For England? Your opinions to MichaelWood@Iname.com or use EZ Mail.


Was Ian Ormondroyd better Than Lee Mills?
Vote for the best City team.